Danica Patrick’s racing career ended when she crashed into the wall during an Indianapolis 500 race at lap 68 out of 200. She is the only woman to consistently race full time at the top of both IndyCar and NASCAR; physicist Janet Guthrie was the first woman in 1976 to break the sex barrier on the track.

I am not sure why I bothered rectifying this one, as I just changed it an hour or so making Mars go south to 12.25 Libra and the Moon north to 13.07 Aries.  In the original setup Mars is north at 12.26 and the Moon south at 12.37, a rather small difference, but the new chart does show the importance of her father butting as Saturn does to her first house and why she is a late bloomer.

The Venus in her fifth house was odd  but now with Mercury there, I can see that she needs more a kindred “sports” spirit than the unequal footing of her physical therapist doctor first husband.  With Venus in the fourth square her Saturn in the first, we clearly see that she has problems playing “wife” or “mother” in a relationship because her relationship with men is so dominating  — Mars in the twelfth house hovers over the map insisting on being the focal determinator.

In the other chart that would be emotional and sensitive Moon playing that role.  It does not seem to fit her personality or her relationships — she proposed to her last beau publicly; fellow race car driver Stenhouse refused. 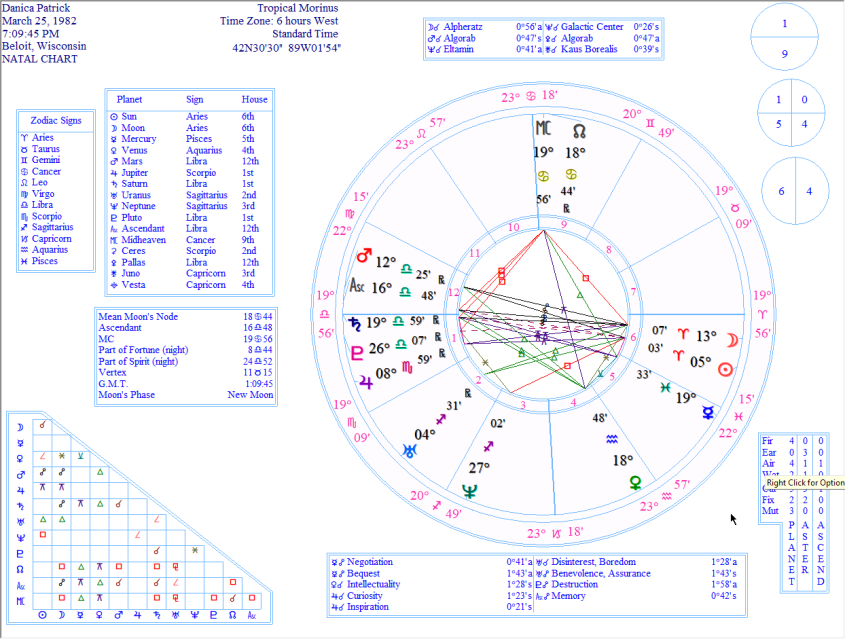 It is good she froze her eggs a few years back.  This chart suggests it may be another year or so before she settles down with someone, and then most likely with a much stronger personality than her own.